In the 1960’s, the guitar was considered a new instrument that produced, as opposed to music, “noise.”  Today, it is one of the most popular instruments around, even spawning video games like “Guitar Hero” that play on the fun of strumming away on the strings.

But it’s worth noting that throughout musical history, some people have so excelled at this particular musical instrument that they deserve their own list.

Without further ado, here are the top seven most awesome guitar heroes.

Jimi Hendrix is almost universally regarded as the ultimate master of the guitar, someone who introduced new sounds to an entire generation that didn’t realize the potential of the still-young instrument.  His version of the national anthem is still considered one of the top individual instrumental performances of all time.

Even if many people today assume that one of the B’s stands for “Burger,” B.B. King is a legend of the guitar, and could perhaps be described as the Jimi Hendrix of the Blues.  His familiar twangs and turns are as distinctive as his own style.

From Led Zeppelin, Jimmy Page’s name is synonymous with the guitar, as he helped fashion many a rock song and sculpt the modern image of the guitar player.

People forget that Eric Clapton was an active participant of the 1960’s revolution in music – not only did he join the popular band “Cream,” he participated in one of the era’s most popular works, the Beatles’ “White Album,” providing a lick of the guitar on the now-famous “While My Guitar Gently Weeps.”  Need I say more?

Many people remember Santana from his profound riffing on “Smooth,” but forget that Santana is an accomplished guitarist of his own right, building a distinctive sound that can’t be mistaken for anyone else.

Even if Richard’s only contribution to guitar rock was the riff from “(I Can’t Get No) Satisfaction,” Richards would be a Hall-of-Fame guitarist.  But because of his contributions to the legendary Rolling Stones, he’ll be remembered for much more than that.

Don’t forget who introduced the world to the now-familiar eastern style of the Sitar, a style duplicated by bands like the Rolling Stones.  Harrison also penned some of the world’s most famous guitar riffs, including on “Here Comes the Sun.”

Some people don’t agree and here is a more recent list: 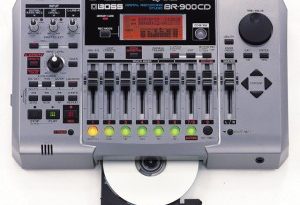